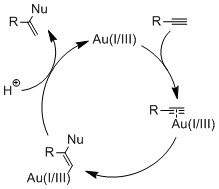 For many years, despite a rich coordination chemistry, gold was judged as being catalytically inactive for the formation of carbon-carbon bonds. In early 1970, few reports demonstrated that gold salts could be very useful reagents to catalyze organic transformations. Indeed, Au(I/III) complexes are soft Lewis acids which selectively coordinate to π-systems, notably, alkynes and allenes. As a result, this makes the substrate π-system deficient in electrons thus favoring the addition of nucleophiles. In the recent years, homogenous catalysis by gold has received considerable attention by the scientific community. The high affinity of Au(I/III) salt to alkyne and allene in the presence of many other functional groups and combined by its ability to stabilize cationic charge (e.g. gold carbene) provide tremendous opportunities for the discovery novel and useful reactions. Despite these advantages, applications of gold catalysis in stereoselective synthesis are still rare. Thrilled by the unique reactivity of gold complexes, our group tackle scientific problems of great interest by gold catalysis, domino reactions and their applications in total synthesis of complex natural products.

Our laboratory has always been interested in total synthesis and the challenge of building better and more ingenious ways to complex natural products.

Highly oxygenated and densely substituted carbon-bridged medium sized rings such are commonly found in nature as structural frameworks of many important bioactive natural products, and in particular, polycyclic polyprenylated acetylphloroglucinols (PPAPs). In the past decades, more than 100 PPAPs exhibiting a wide variety of biological activities (antibiotic, anti-HIV, anti-oxidant, etc.) have been isolated from Guttiferrea plants such as hyperforin and garsubellin A. The challenging synthesis of PPAP structures combined with their promising therapeutic potential has drawn attention from several research groups. Our group plan on using gold(I) catalysis to access bicyclo[m.n.1]alkanone cores of these natural products to provide a viable and modular synthetic pathway.

In 1987, Hashimoto and co-workers isolated an unprecedented compact diterpene, vinigrol, from the fungal strain Virgaria nigra F-5408, found at the foot of Mount Aso in the Kumamoto Prefecture in Japan. Biological testing of vinigrol has revealed a number of interesting properties, including an influence on platelet aggregation and tumor necrosis factor (TNF) antagonism. These results prompted investigations into the application of vinigrol in medicine. Not surprisingly, the impressive biological activities of vinigrol, combined with its unique and synthetically challenging structure, have resulted in considerable attention from the synthetic community. We were able to use our direct type 2 IMDA approach to achieve a stereocontrolled formal total synthesis of vinigrol intercepting Baran and al. intermediate.

Synthetic organic chemists have found attractive and structurally diverse targets in the alkaloids from the club mosses of the genus Lycopodium. These compounds possess polycyclic frameworks decorated with various functional groups. Magellanine, Magellaninone and Paniculatine are three Lycopodium alkaloids of the Fawcettimine class which were isolated from the species Lycopodium paniculatum 1 and Lycopodium magellanicum 2 by Castillo and coworkers in the mid 1970’s. These alkaloids possess an unusual, angularly fused 6-5-5-6 tetracyclic core and 5 or 6 contiguous stereocentres, one of which is a quaternary carbon centre. Magellanine and Magellaninone differ only in the oxidation state at the C5 position. The compact arrangement and uniqueness of the magellanane skeleton has made these alkaloids an attractive and challenging target for synthetic organic chemists. Several creative and distinct strategies have been used to reach this goal. We plan on utilizing gold(I) catalysis to build to core of the molecule.

Triptolide is one of a number of natural diterpenoid molecules isolated from the Chinese plant Tripterygium wilfordii Hook F., known also as the Thunder God Vine or Lei Gong Teng. Kupchan and colleagues isolated this complex triepoxide, along with tripdiolide and triptonide in 1972 via an ethanolic extraction assisted by a cell activity assay against KB carcinoma cells and L-1210 and P-338 leukemia cell lines. 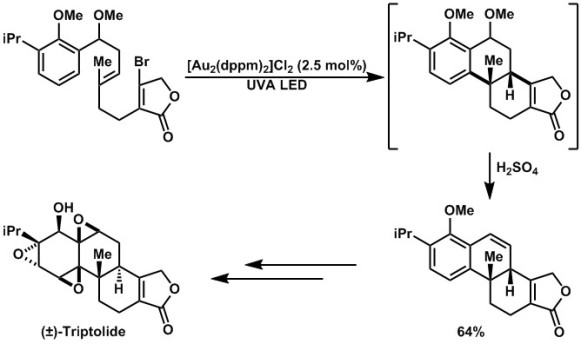 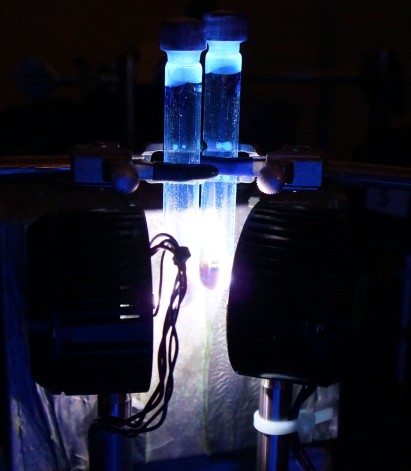 The conversion of photons into chemical energy is one of the most fundamental chemical activation pathways as well as the most sustainable. Excitation of molecules allows the mild generation of highly reactive species that are not always available through thermal processes. Our research program looks to elucidate the roles and reactivity of light-enabled organic transformations and describe these photochemical processes using blank and control reactions along with mechanistic studies. Through this strategy, the mild conversion of simple and readily available starting materials into complex/diversified products is achieved.

Examples of such light-mediated transformations include the facile conversion of primary alcohols into bromoalkanes and the synthesis of symmetric anhydrides and amides from common carboxylic acids.

Our main interests lie in the development of photoredox catalyzed transformations that combine our love for photo/radical chemistry and gold catalysis. This idea has been realized with the implementation of the newly built industry leading LED technology and top notch assembly of our photochemistry set-up.  Upon excitation with 365 nm LEDs, dimeric Au(I) phosphine complexes such as [Au2(dppm)2]Cl2 become powerful reductants, capable of electron transfer reactions with unactivated bromoalkanes. This process is mediated by the formation of an inner sphere exciplex that makes activation of such strong C-Br bonds possible.

Upon genesis of these alkyl radicals, reduction, addition, and cascade cyclization transformations can be utilized in the synthesis of high value chemicals and natural products.